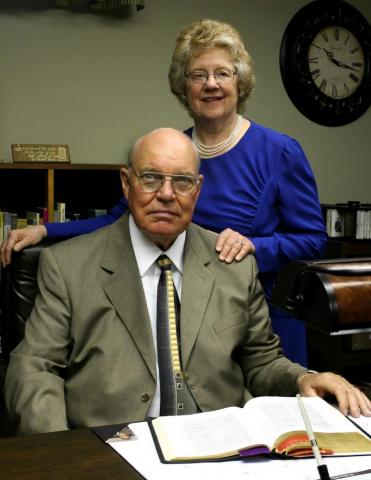 Pastor Carroll Torberson is a native of rural Canton, South Dakota, where he had the privilege of attending a one-room country school. After high school he attended and graduated from South Dakota State University with a Bachelor of Science degree in agriculture. Having received the Lord Jesus Christ as personal Savior his last year in college, he farmed one year on the family farm before God led him to Minneapolis to Central Baptist Theological Seminary. After graduating from seminary, he served churches in Hinckley, Minnesota, and Estherville, Iowa. In 1984 the Lord directed him and his family back to South Dakota to seek to plant a church in Pierre. Since June of 1990 he has served as pastor of Grace Baptist Church in Mitchell.

Pastor Torberson met his wife, Joyce, when they were both students at SDSU. They were married while he was in seminary. One of the highlights of their ministry was living in Israel in 1974 as short term missionaries. While there they had the opportunity to study at the American Institute of Holy Land Studies in Jerusalem.

God has blessed the Torbersons with eleven children—one is in heaven and the other ten are serving in various ministries in churches from California to North Carolina and South Dakota to Texas.

Mrs. Torberson has been a faithful pastor’s wife, beloved stay-at-home mother, as well as home school teacher for all the children—a stabilizing force in both the home and the ministry.